Confidence in elections is paramount to our system of self-government.  Those we elect have an obligation to work together to build security and transparency in those elections.

Today, both parties are largely failing that test.

After the 2020 election, President Trump’s falsehoods about a “stolen election” set the stage for him to agitate a crowd that gathered on Jan. 6 to “fight like hell” or “you’re not going to have a country anymore.”  At least several hundred demonstrators took those words seriously and broke into the U.S. Capitol intent on disrupting certification of electoral votes.

As their public support collapses, President Biden, Sen. Chuck Schumer and other Democrats proclaim that if Republicans win in 2022, “it could be the last election.” END_OF_DOCUMENT_TOKEN_TO_BE_REPLACED

Like a demolition team swinging a sledgehammer, legislators intent on purging Native American mascots from Colorado schools smashed their opposition with little consideration of the wreckage they were creating.  So certain of the righteousness of their cause, they denied even mere consideration to the communities upon which they imposed their will.

Two of Colorado’s smallest districts – Arickaree (103 students) and Mountain Valley (153 students) – are being severely harmed by this legislation which isn’t just about mascots but instead prohibits any sort of Native American imagery “used as a mascot, nickname, logo, letterhead or team name” by a school.

Surrounded by prairie and farmland on the plains of Washington County, Arickaree School is one of Colorado’s few remaining country schools, located between Cope (population 230) and Anton (155).

Arickaree derives its name from the Arikaree River, which begins near Cope and was named for the Arikara tribe.  Given its location and history, it’s hardly surprising that the community selected “Indians” as the name for school teams.  Critics could just as easily argue that ignoring the area’s Indian heritage – by changing the name to, say, Arickaree Guardians – would be disrespectful, too. END_OF_DOCUMENT_TOKEN_TO_BE_REPLACED

Republicans must confront the “elephant in the room” – former President Trump’s persistent claims that the 2020 election was stolen.  Many Republicans believe him.  Most Americans do not.

Trump recently said Republicans “will not be voting in ’22 or ‘24” unless the “Election Fraud of 2020” is “solved.”  Democrats laughed and cheered!  They know the one thing that can rescue them from the growing anti-Biden backlash is Republicans foolishly sitting out elections.

All election complaints are not created equal, so let’s consider them on their own merits. END_OF_DOCUMENT_TOKEN_TO_BE_REPLACED

The first rule of the hole says, “When you’re in a hole, stop digging!”

Even in Republican strongholds of Douglas and El Paso counties, unaffiliated voters are breaking hard against Republicans.

In Douglas County, Joe Biden won 65.7% of ballots cast by voters who were neither Republican nor Democrat, piling up 27,011 more votes than Donald Trump. Two years earlier, Jared Polis won 64.2% of those ballots over Republican Walker Stapleton.

In El Paso County, long considered vital for any Republican to win statewide, Biden won 59.1% of ballots cast by unaffiliated voters in 2020, and Polis won 60% of those ballots in 2018. 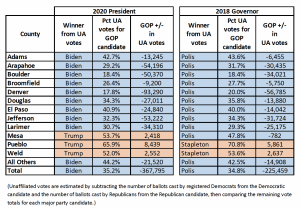 Other metro countries were much worse for Republicans.  In both Denver and Boulder, Biden won more than 80% of the unaffiliated vote – a 4-to-1 margin.  In former bell-weather counties, Biden won 70.8% of unaffiliated votes in Arapahoe, 67.7% in Jefferson, and 69.3% in Larimer.  In fact, Biden actually racked up bigger margins of raw votes among unaffiliateds in Arapahoe and JeffCo than he did in Boulder.

Colorado Republicans already find themselves in a deep hole with swing voters.  What could they do to dig that hole even deeper?  Telling those unaffiliateds who still want to vote in our primary election that they aren’t welcome would just about turn that hole into a bottomless pit and seal the fate of Republicans running for statewide office.d

Mark Hillman served as Colorado’s Republican National Committeeman from 2008 to 2012.

On Sept. 11, 2001, Islamic terrorists on a murder-suicide mission flew commercial airliners into the two World Trade Center towers in New York City and the Pentagon in Washington.  A fourth crashed in a Pennsylvania field.

The attacks against our country unified Americans in a sense that’s almost inconceivable today.  Together, we mourned the 2,600 people killed in the collapse of the twin towers and were horrified to watch many leap to their deaths to escape the inferno.

We celebrated the courage of the emergency workers who rushed into the burning towers to save lives, and we grieved for 400 who died while bravely working to save others.

We admired the selfless courage of the passengers on United Flight 93 who, having learned that other planes had been crashed into buildings, confronted their hijackers, resulting in their plane ultimately crashing in a Pennsylvania field killing those on board but not killing hundreds more at the U.S. Capitol, its intended target.

Today, nearly one in three Americans has only a textbook knowledge of that day.  Either they were not yet born or were too young to remember it.  They should learn from us that  9/11 was a tragedy that pulled Americans together and often brought out the best in us. END_OF_DOCUMENT_TOKEN_TO_BE_REPLACED

New presidents often find themselves tested early in their administration; their performance is revealing to allies and enemies alike.

JFK’s failed Bay of Pigs invasion of Cuba and subsequent summit with Soviet premier Nikita Kruschev, about which Kennedy remarked, “He just beat the hell out of me!” led the Russians to believe they could place nuclear missiles in Cuba.  The ensuing Cuban missile crisis brought the USA and USSR to the brink of nuclear war.

By contrast, Ronald Reagan’s firing of 11,000 air traffic controllers who illegally went on strike eight months into his first term indicated to the Soviets that he should be taken seriously, a fact noted by Democrat Speaker of the House Tip O’Neill after a visit to Russia.

Elections are about addition.

In Colorado, neither Republicans nor Democrats can win an election purely by turning out their own base.  To win, each party must add to its own turnout by persuading voters who are unaffiliated, members of “minor” parties or disaffected members of the rival major party.

Consider the share of ballots cast by Republicans and Democrats in the past three general elections:

In the last two elections, Republicans running statewide have started with a turnout deficit, so they needed to persuade more unaffiliated voters than did their Democrat opponents.  But instead of improving their strategy to win the hearts and minds of unaffiliated votes (UAVs), Republicans have been falling further behind.  Barack Obama won 60% of UAVs in 2012; Hillary Clinton won 62% in 2016; Jared Polis won 65% of UAVs in 2018; and Joe Biden won 65% of UAVs in 2020. END_OF_DOCUMENT_TOKEN_TO_BE_REPLACED

Governor Jared Polis and Progressive Democrat majorities at the State Capitol have spent the past three years ignoring clearly-expressed voices of Colorado voters on tax and economic issues.  In fact, Progressive Democrats’ disregard for many of the same voters who elected them has become so brazen that they seem to be daring voters to hold them accountable.

With commanding majorities of 41-24 in the House of Representatives and 20-15 in the state Senate, it’s understandable that Democrats are developing a sense of invincibility.

However, it remains to be seen if the Democrats’ recent surge – in 2017, they held a 34-31 margin in the House, while Republicans had an 18-17 majority in the Senate – is due to their own popularity or because Donald Trump irritated many Colorado voters. END_OF_DOCUMENT_TOKEN_TO_BE_REPLACED

When the Colorado General Assembly adjourned on June 8, small-business owners and job creators breathed a collective sigh of relief.

After suffering through COVID-related restrictions and closures for most of the previous 12 months, employers were hopeful that legislators would join in their efforts to help get the economy back on its feet.

Maybe legislators in another state, but not in Colorado in 2021. END_OF_DOCUMENT_TOKEN_TO_BE_REPLACED

As we observe the anniversary of the Declaration of Independence this Fourth of July, we should consider the unique form of government for which our Founding Fathers chose to risk “their lives, their fortunes, and their sacred honor” against the seemingly-invincible British.

The definitive passage in the Declaration reads:  “We hold these truths to be self-evident, that all men are created equal, that they are endowed by their Creator with certain unalienable rights, that among these rights are life, liberty and the pursuit of happiness.  That to secure these rights, governments are instituted among men, deriving their just powers from the consent of the governed.”

In these 57 words, the Founders established that:

END_OF_DOCUMENT_TOKEN_TO_BE_REPLACED

Fed up with BIG GOVERNMENT?

Coloradans for Common Sense is committed to:

Quote of the Day

We know what happens to people who stay in the middle of the road. They get run over.